There are a number of ways I do use creative ways to make a change on ordinary objects or everyday items. If you view the image below it is a easy picture of an everyday object with a twist.

I went out for a walk in the neighbourhood and brought my camera along as I often do, and on my way home it was a few minutes until a train departed so it was decided to see how I could capture the departure.

I decided to catch the train windows in a way I have not seen before and since it was a dark, cloudy night the setting was perfect, for those who like to experiment a bit. Now it is to dark to focus so it turned into a bit of a guesswork with manual focus, however with a bit of practice and concentration I was able to get the tracks perfect. Experience tells me a bit about witch settings to pick and since the unknown is the speed of the train, the shutter speed needs to make the final impact. Do I freeze or capture motion? I did not use flash so to lock the train in the picture is not easy at night, and it would not be as good as a picture as I would prefer.

I first set my ISO to 320, however this gave me a shutter speed that was way off and about 30 seconds, 3-5 sec was the target. So after a few adjustments the settings turned out like the ones seen below the image.

The great things about trains is that you always get a bit of a warning, this picture is taken right after a curve in the tracks, so you can’t see the train until it almost passes you. However to hear the tracks sing is a valuable clue.

Train comes along and just before it enters the image frame I push the shutter button and the two white streaks in the top black area is actually the headlights of the train. The big white line is of course the windows itself, the main idea behind the picture. I might try this picture again and fire my flash slightly by hand to “freeze” a window with a passenger just to try it out. However the picture is exactly as I wanted it this time, and to wait 2 hours for the next train was out of the question.

Probably the most important part of the picture so it may describe the object by itself is however the train tracks. Without them it would be to imaginary for the purpose, if they would have been left out (tilt the camera up and get more sky) the picture would have to be explained in detail to every single person looking at it. In this way the capture helps you out in the explanation.

The beauty of opening the shutter before the train comes is that the trees in the background is captured and sort of paints its way into the picture. They are subtle, but gives a background to the picture. 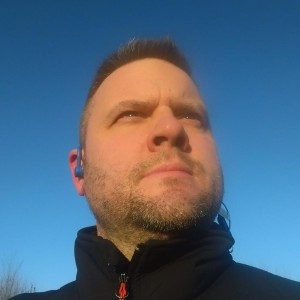 The new nikon future is here!

Everyday use of the camera